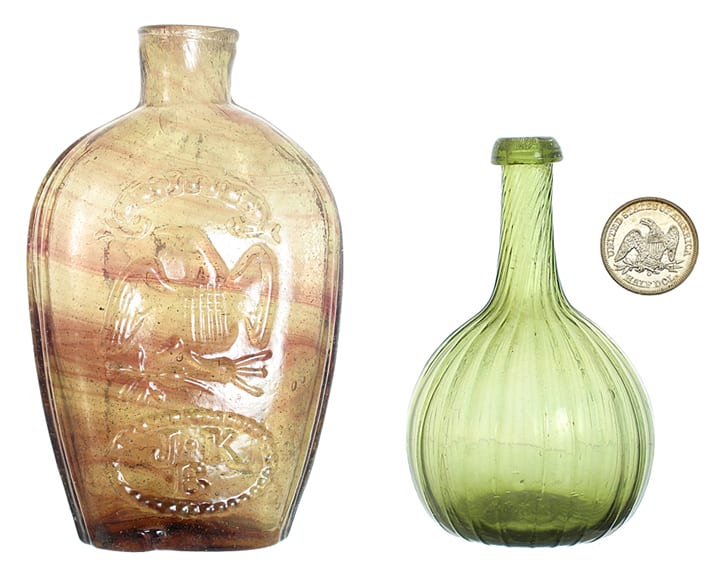 Sandor Fuss stated in Baltimore in early March that he was not going to participate in the auction. To my surprise, I received an email from him after the auction with the attached pictures for two lots he had won. I think these are rather extraordinary beautiful and rare bottles. Way to go Sandor! Can’t wait to see them on my next trip to Denver.

Lot #1   GIV-3   (Eagle motif)   JKB   (Masonic motif) As noted in the catalog…Ginger-ale with burgundy striations. 7”. Pint flask. Pontil scar. Circa 1815-1820. New England. Believed by some to have been produced at a factory in Keene, New Hampshire, but possibly blown at a Boston area works. Wonderful, well pronounced burgundy striations create an eye appealing, and rarely colored beauty! Among the earliest of figured flasks produced in this country, being nearly 200 years old. Some high point wear is visible upon close inspection. Tiny, half-pinhead blemish on the medial rib is either a miniscule flake or tiny open bubble. Either way, it is very minor, and mentioned only for total accuracy! We’ve only seen one other similar flask in recent years, and the other example is believed to be a slightly lighter color with less pronounced striations. A fabulous and desirable rarity in great condition!! Winning Price: $39,200.00 (including 12.0% buyer’s premium)

Lot #63   Miniature 24 Rib Globular Bottle Green. 5-3/16”. 24 vertical ribs. Pontil scar. Midwest America, circa 1815-1835. A much smaller example than is normally seen in both height and circumference. The body is slightly smaller than a baseball. Well pronounced ribs traverse from the pontil mark on the base all the way to the lip. The ribbing remains perfectly vertical all the way to the neck, then turns slightly to the right. From a northeast Ohio collection, and likely surfaced in that area many years ago. A rare size in an equally rare color! Many of the advanced pattern molded glass collections in this country lack an example such as this, including some major museum holdings. Very light haze on the interior might wash out. Some shelf wear on the base and a hint of wear on the ribs. A beauty!!! John Betker collection. Winning Price: $14,560.00 (including 12.0% buyer’s premium)

Ferdinand Meyer V is a native of Baltimore, Maryland and has a BFA in Fine Art and Graphic Design from the Kansas City Art Institute and School of Design. Ferdinand is the founding Principal of FMG Design, a nationally recognized design consultation firm. Ferdinand is a passionate collector of American historical glass specializing in bitters bottles, color runs and related classic figural bottles. He is married to Elizabeth Jane Meyer and lives in Houston, Texas with their daughter and three wonderful grandchildren. The Meyers are also very involved in Quarter Horses, antiques and early United States postage stamps. Ferdinand is the past 6-year President of the Federation of Historical Bottle Collectors and is one of the founding members of the FOHBC Virtual Museum.
View all posts by Ferdinand Meyer V →
This entry was posted in Auction News, Collectors & Collections, Flasks, Historical Flasks and tagged auction, Baltimore, Eagle, Flask, flasks, Glass Discoveries, Globular, JKB, Keene, Masonic, Midwest, New Hampshire, ohio, sandor fuss. Bookmark the permalink.