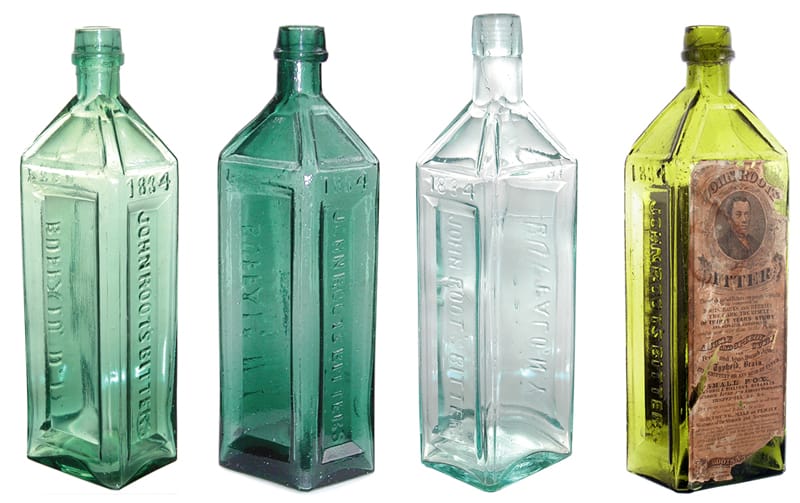 The recent Glass Discoveries Auction #64 in March had a wonderful example of a John Roots Bitters in a strong bright olive green color. There were also original labels. I inspected this bottle at the FOHBC Wilmington, Ohio National Show in 2010 when Ray Klingensmith gave me a early preview. There was also another very similar example at the show that had just been dug that had been brought to my attention. Unfortunately I did not get this bottle to add to my color run (left three bottles). I’m in the hunt though. The Glass Discoveries lot is listed below: 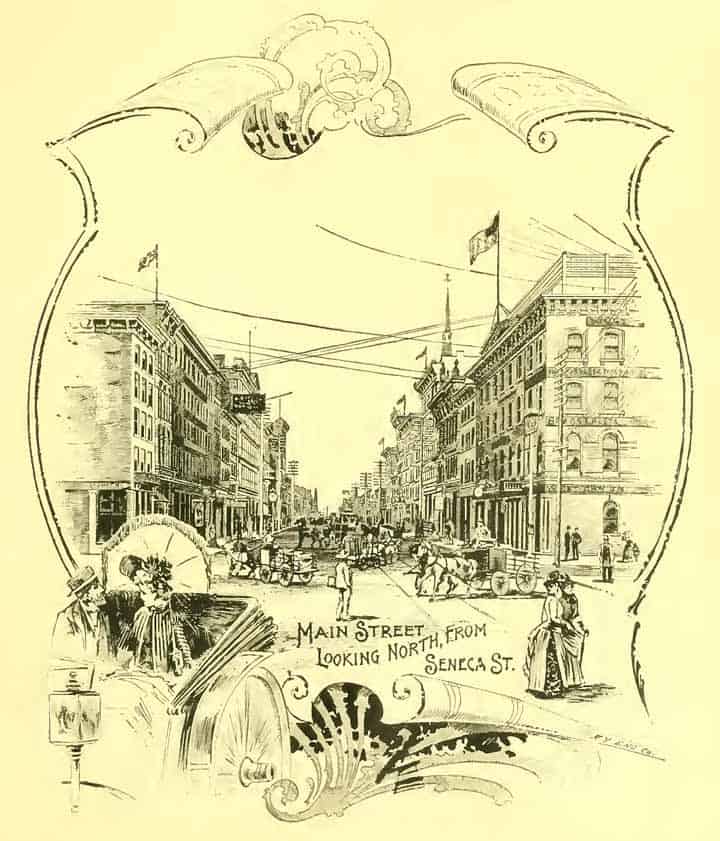 The establishment where these bitters are manufactured was founded as far back as 1834 by the man whose name they bear, at No. 292 Seneca Street, and since that time the reputation of this infallible remedy has steadily increased. In 1874, Mr. Francis Roots, on the death of the founder of the business, succeeded to the latter, and by his ability and experienced energy has proved himself worthy of the house he was at that time called on to manage. In 1890, the growing demand for its products necessitated the removal of this establishment to the larger and more commodious premises it now occupies at No. 308 Seneca Street. Unlike many other preparations generally classed under the name of bitters, these are a purely medical compound prepared soley from vegetable sources, and contain nothing that is not salubrious, cleansing and restorative. They cure fever and ague, dyspepsia, jaundice, liver and kidney…. typhoid fever, and is highly recommended for the absolute purity and tonic effects. The sale of these goods is very large, extending all over the United Stales. The manufacturing department is under the immediate supervision of the proprietor, whose long experience and ability are sure guarantees of the excellence of its products. Although the house is constantly in receipt of thousands of certificates to the value of these bitters as a never-failing remedy, yet it has always followed the policy of the bitters speaking for themselves, and the immense sales may testify to the great confidence the public has in them. Mr. Root, like his predecessor is a Canadian by birth but has been a life-long resident of Buffalo where he is held in high esteem for his honorable and upright dealings, and his many personal qualities. All orders entrusted to him receive prompt and careful attention and no industrial house in the state enjoys a greater popularity with the trade generally.

Depicted below is a nice John Roots Bitters Advertising Note I picked up on eBay. 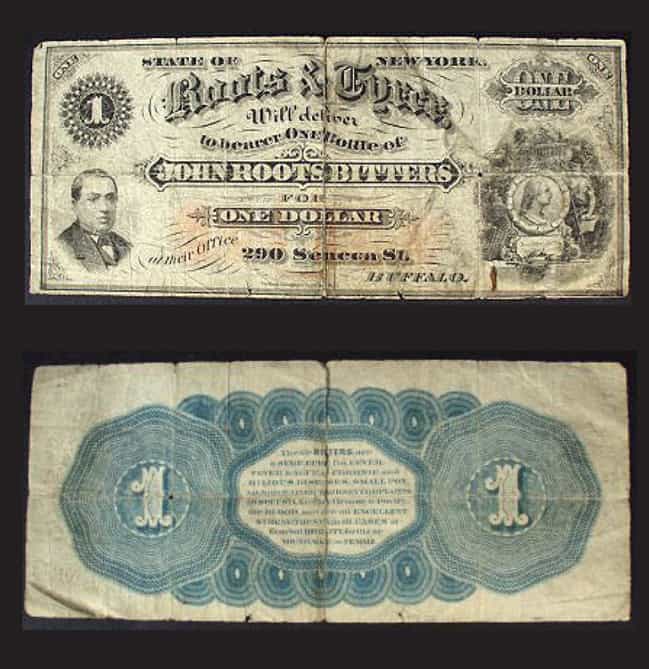 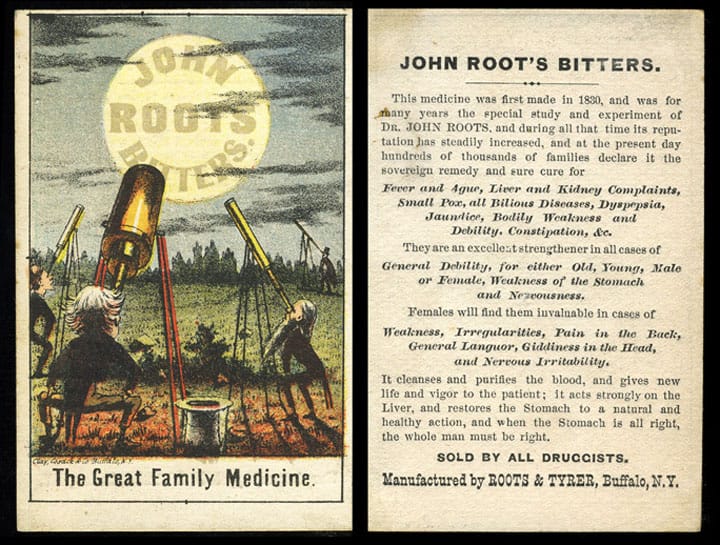 This scarce original early 1870s trade card advertises John Roots Bitters, manufactured by Roots & Tyrer of Buffalo NY. The image is of several astronomers gazing through telescopes at the full moon with the product name on it. Printed by Clay, Cosack & Co., also of Buffalo. ebay (January 2013 addition to post) 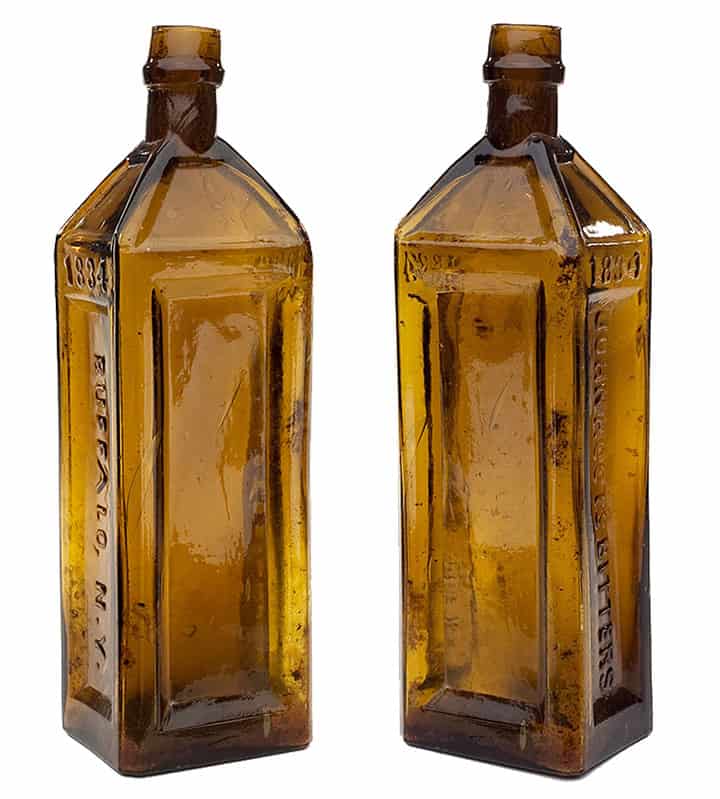 “JOHN ROOT’S BITTERS / 1834 – BUFFALO, N.Y. / 1834″, America, 1865 – 1875. Yellowish honey amber, rectangular semi-cabin, applied sloping collar with flat band – smooth base, ht. 10 1/8”, very near mint; (some in-manufacture crazing lines in the neck and some dried interior contents or residue, most of which would almost certainly soak out). R/H #R90.4. Very rare in amber, and this example has plenty of yellow in it! Note, this example is fresh to the market, discovered at a local auction near the Southern Ohio / West Virginia area. Beautiful color, almost a butterscotch tone. And, as mentioned, the interior appears to have dried medicine or contents that should easily soak out. – American Glass Gallery Auction #13

Ferdinand Meyer V is a native of Baltimore, Maryland and has a BFA in Fine Art and Graphic Design from the Kansas City Art Institute and School of Design. Ferdinand is the founding Principal of FMG Design, a nationally recognized design consultation firm. Ferdinand is a passionate collector of American historical glass specializing in bitters bottles, color runs and related classic figural bottles. He is married to Elizabeth Jane Meyer and lives in Houston, Texas with their daughter and three wonderful grandchildren. The Meyers are also very involved in Quarter Horses, antiques and early United States postage stamps. Ferdinand is the past 6-year President of the Federation of Historical Bottle Collectors and is one of the founding members of the FOHBC Virtual Museum.
View all posts by Ferdinand Meyer V →
This entry was posted in Advertising, Auction News, Bitters, Bottle Shows, Collectors & Collections, Color Runs, Figural Bottles and tagged bitters, Bob Watson, Buffalo, Francis, Glass Discoveries, John, John Root's Bitters, Meyer, New York, ohio, Root, Seneca, Wilmington. Bookmark the permalink.