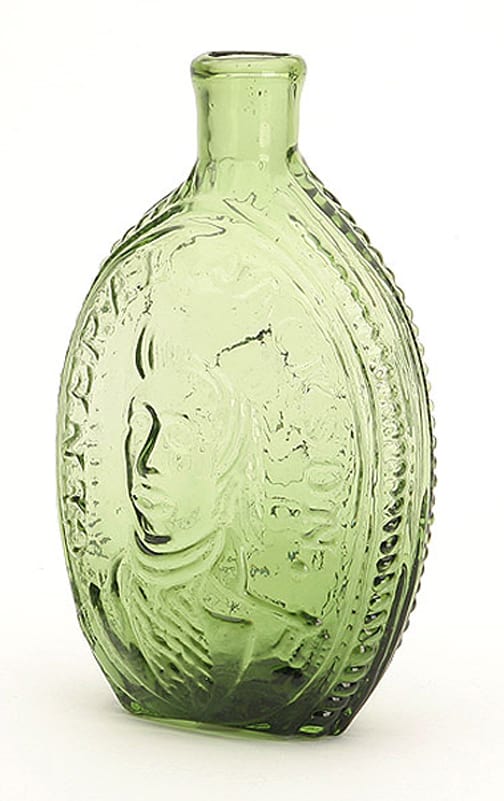 Norman Heckler announced on their web site the sale of an extraordinary General Jackson | Eagle Flask in their Auction 90. The auction listing is as follows…

GI-66   General Jackson. ” And Bust – “J.R. / Laird. S.C. Pitt.” And Eagle Portrait Flask, John Robinson Manufacturers, Pittsburgh, Pennsylvania. 1820-1840. Brilliant yellow green, inward rolled mouth – pontil scar, pint; (a reflection adjacent to a bubble at the interior of the base at the left side of the Jackson bust that occurred at the time of manufacture). Extremely rare mold in an extremely rare color, perhaps unique. Particularly strong embossing. This flask was purchased by the consignor’s father in 1971 from a Mr. Ernie Burger who had purchased the flask from a house in North Dayton, Ohio. The price was $41.80. As the years went by Edmund Blaske offered $750 and later Roy Brown offered a new Cadillac for the bottle. It has been in the family for the last 39 years and safely stored in a box. 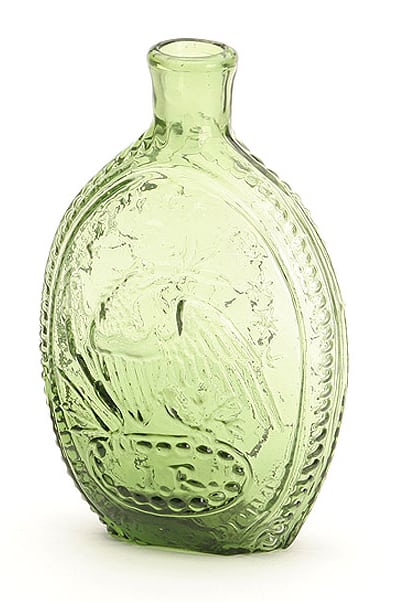 Norman Heckler Sr. further states on their web site…“I was fascinated by the color of this bottle, in over 50 years in this business we have not had another bottle come forward in this color – and the impression and condition were also fantastic,”

The consignor of the bottle first showed him a photograph of the flask while at an antique glass show in Ohio. The consignor and her parents had both been avid bottle collectors. Although she invited Hecklers to her house to view the bottle, she however declined the auction company’s invitation at the time to sell the bottle for her, saying she wanted to hang onto it as it reminded her of her father. “The photograph did not do this bottle justice – it was absolutely beautiful in person,” Norman Heckler, Sr. recalled. The consignor’s father had purchased the bottle, with her in 1971 from Ernie Burger, an antiques dealer, for the price of $41.80. According to the consignor several major collectors tried unsuccessfully to acquire the bottle over the years, with the late collector Edmund Blaske offering $750, and on another occasion, the bottle collector Roy Brown offering a new Cadillac.

Ferdinand Meyer V is a native of Baltimore, Maryland and has a BFA in Fine Art and Graphic Design from the Kansas City Art Institute and School of Design. Ferdinand is the founding Principal of FMG Design, a nationally recognized design consultation firm. Ferdinand is a passionate collector of American historical glass specializing in bitters bottles, color runs and related classic figural bottles. He is married to Elizabeth Jane Meyer and lives in Houston, Texas with their daughter and three wonderful grandchildren. The Meyers are also very involved in Quarter Horses, antiques and early United States postage stamps. Ferdinand is the past 6-year President of the Federation of Historical Bottle Collectors and is one of the founding members of the FOHBC Virtual Museum.
View all posts by Ferdinand Meyer V →
This entry was posted in Auction News, Collectors & Collections, Flasks, Historical Flasks and tagged Cadillac, Eagle, Edmund Blaske, Ernie Burger, General Jackson, Gii-66, Historical Flasks, John Robinson, Norman Heckler Auctions, Pennsylvania, Pittsburgh, Roy Brown. Bookmark the permalink.