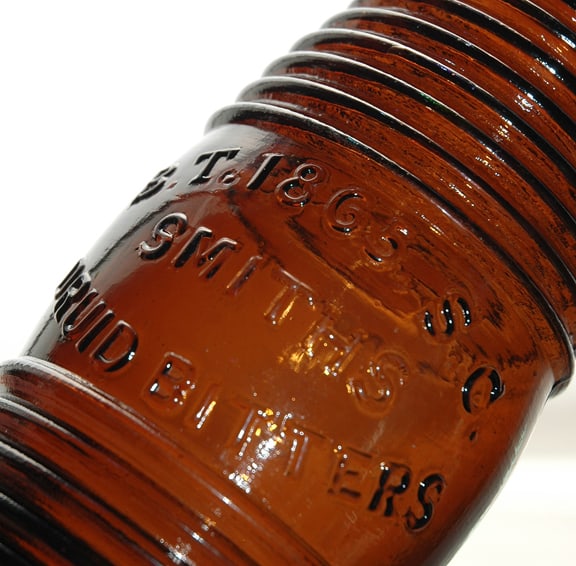 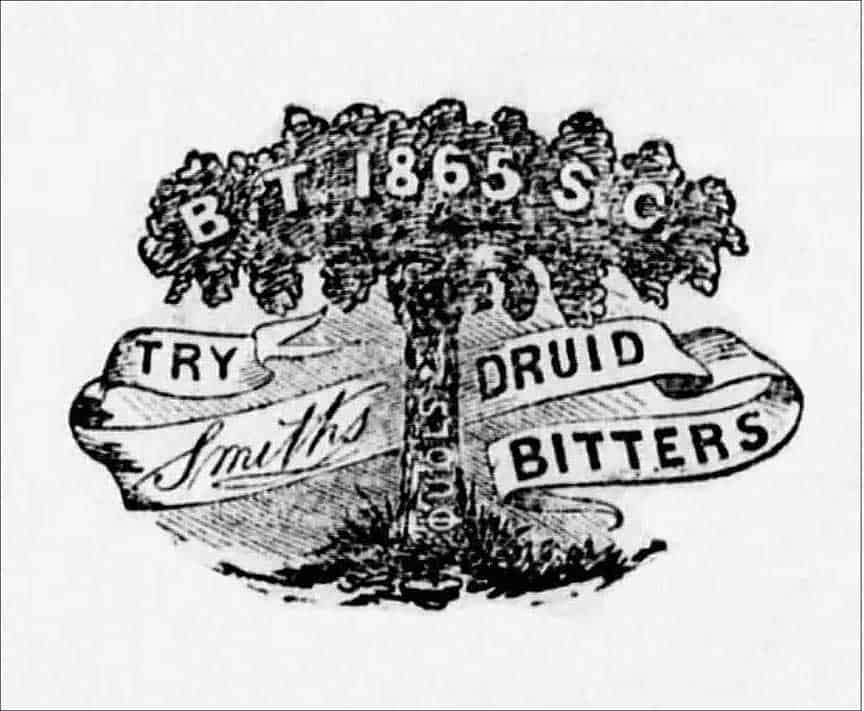 The Smith’s Druid Bitters is a great Baltimore figural bitters barrel that I have written about before. Read: Awesome Smith’s Druid Bitters Moves from West Virginia to Houston to Oregon. These barrels are extremely tough to obtain and rarely make an appearance at an auction, eBay or bottle show circuit. Most are embedded in collections. You would think that they would all be amber in coloration but that is not the case. I have seen, and possessed one in amber and olive green and recently have seen two in yellow amber and one in puce.

Three of the Smith’s Druid Bitters that I have seen have shown up in the Shenandoah Valley (western Virginia and Eastern West Virginia) region leading one to believe of local distributors for this extremely rare Baltimore bottle. A puce example owned by a collector in West Virginia was found in Stephens City which is west of Winchester, Virginia.

Here is what I have on the brand including two documents from my collection. I would love to find a labeled example and some related advertising for John Smith and his son.

Box of candy for someone who can tell me what “B. T.” and “S. C.” stands for? Also, while you are at it, what is the meaning of the cryptic lettering within the tree trunk of the trademark logo for Smith’s Druid Bitters? Looks like some type of Greek or Celtic lettering. 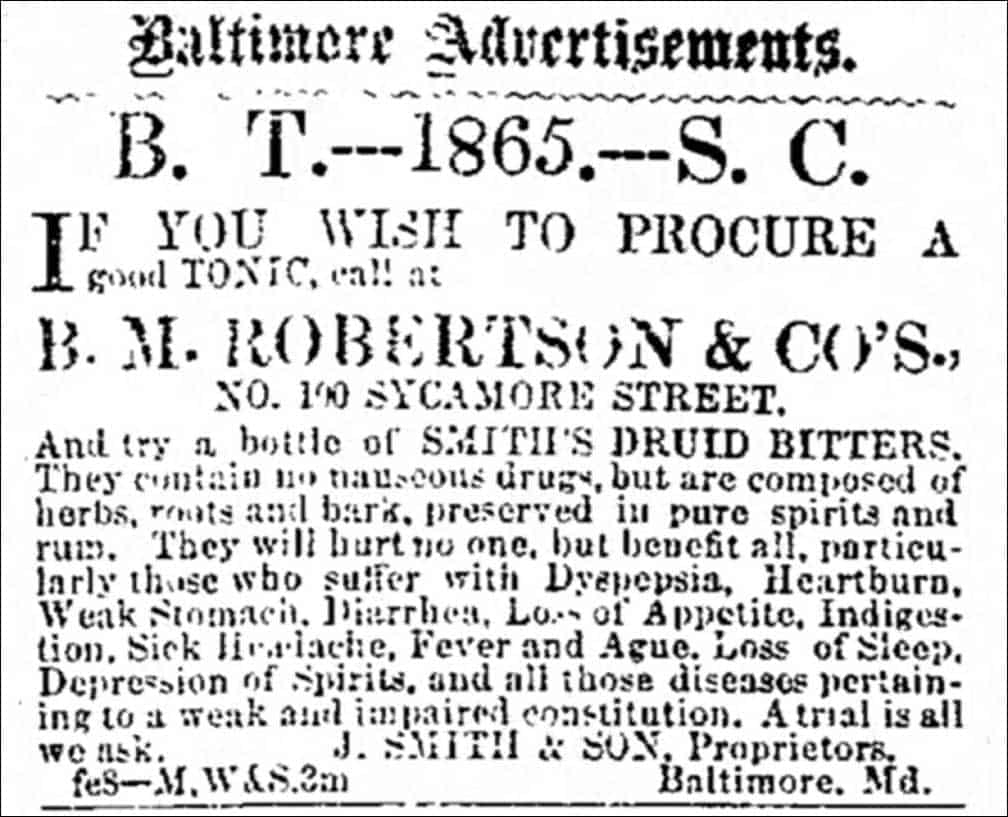 I found this 24 April 1866 advertisement in a Petersburg, Virginia newspaper, showing “B. M. Robertson & Co.” as the Virginia proprietor for Smith’s Baltimore bitters. Hope that helps! Furthermore, I’ve confirmed “B. M. Robertson” as a Petersburg, Virginia druggist, grocer and merchant during the Civil War and that he sold supplies to the Confederacy, including medical, food, and chemical supplies. Enjoy! – Jim (Schmidt)

Plantation Bitters became the bottled liquor of the age. It was made out of alcohol, water and flavoring, and was really very attractive as to taste and results. The Hostetter and the Log Cabin followed closely behind in popularity. The Log Cabin got into sutler tents all over the district which the army occupied. Its principal advertisement was the strange glass bottle made in the shape of a log cabin. At about the time I speak of, all three of these liquors were on sale at Boyer’s.

The legend of the Plantation Bitters was that it meant “Sure thing in ten years from 1860.” That is, when the inventor had made the decoction, and submitted it to a friend as an invention and marketable article, the friend, so the story goes, told him that it was a sure thing for a fortune in ten years. So, acting on this thought, he had billed the United States, “S. T. 1860 X.,” and spent half a million advertising “S. T. 1860 X.,” before anybody knew what it was all about.

Here is another thought.

No doubt the Druid’s anogram was the result of following the success of the Drake’s Plantation bitters Ad campaign. Best guess, Best Tonic 1865 Sure Cure – Steven James Anderson

Receipt dated 1867. Cream paper with black engraving of an attractive Smith’s Druid Bitters logo and a hand written notation as follows, ‘on o/e all due up to this date except 1 barrel whisky’. This is also the exact receipt pictured on p. 506 of ‘Bitters Bottles’ (R/H). – Meyer Collection 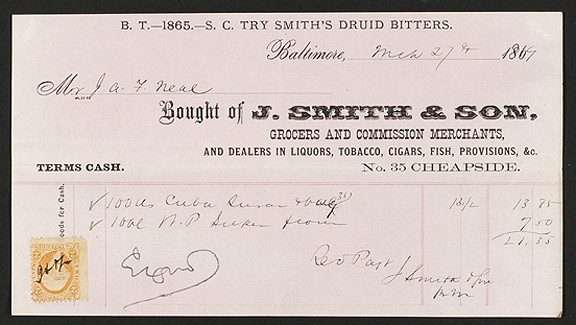 J. Smith & Son (John Smith and Joseph S. Smith) were wholesale grocers and commission merchants who sold liquor, tobacco, cigars, fish and other provisions to the seasoned Baltimore inner harbor inhabitants and sailors. They were located at No. 35 Cheapside Street in Baltimore, Maryland.

I believe that John Smith worked at C. C. Adreon & Company who were importers and dealers in brandies, wines, gins and cigars located at two locations in downtown Baltimore, one being at 35 Cheapside. John Smith would take over the Cheapside location in the mid 1860s. In 1873, he was partnered with W. P. Whiting and the business was called Smith & Whiting. By 1883, W.P. Whiting & Co. took over the concern again as grocery and commission merchants located at 35 Cheapside.

Baltimore’s Inner Harbor was unsuitable for larger ships and heavy industry, both of which found Fells Point, Canton, and Locust Point to be more accessible. In spite of these disadvantages, the so-called “Cheapside Wharf” along Light and Pratt streets remained crowded with wooden docks and warehouses well into the 1950s. Cheapside Street disappeared after the 1904 Baltimore fire that burned the city. Cheapside and Franklin Lane were never rebuilt. In the maps below, we can see that Cheapside Street was one block east of Calvert Street and perpendicular to Pratt Street. 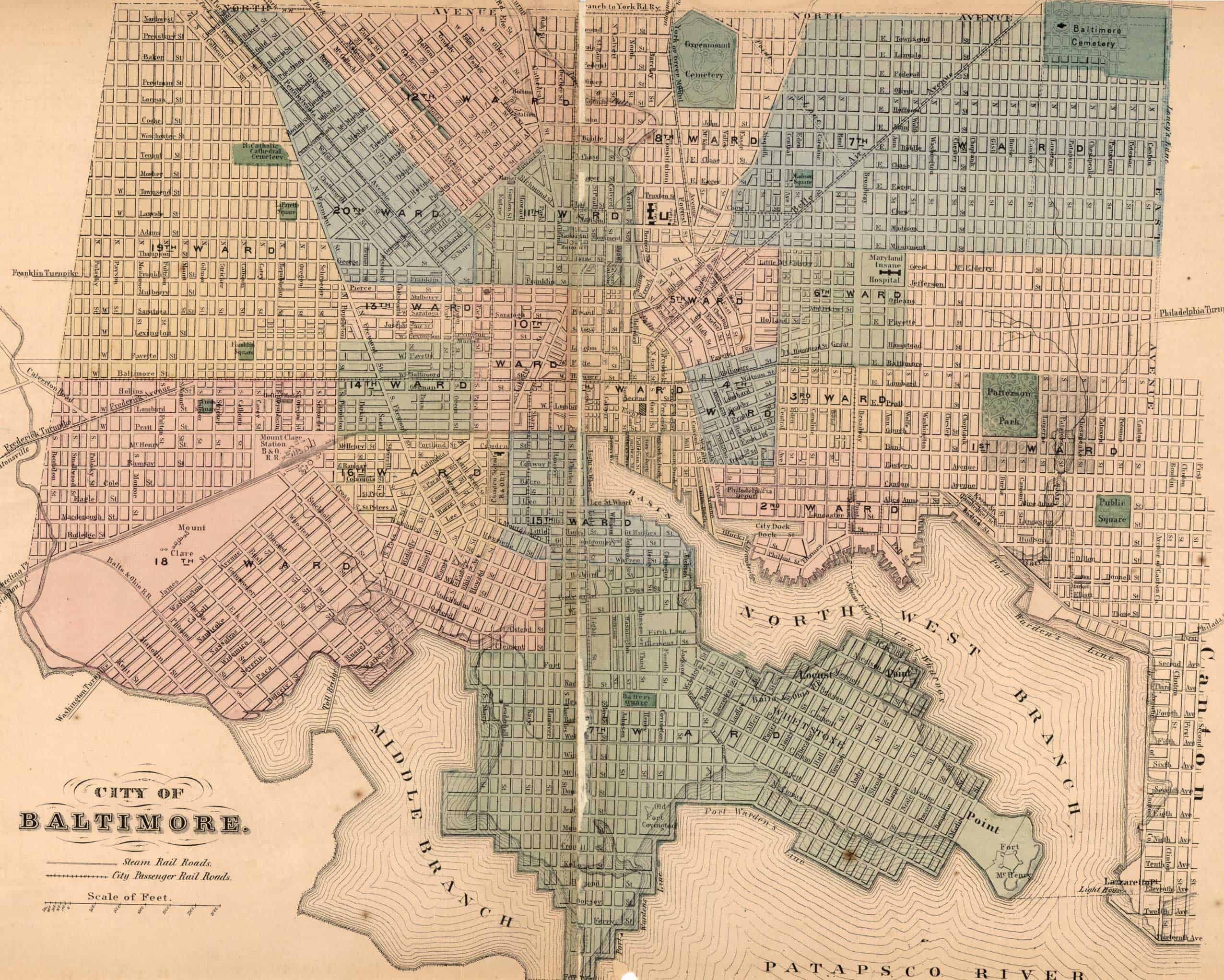 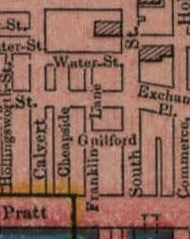 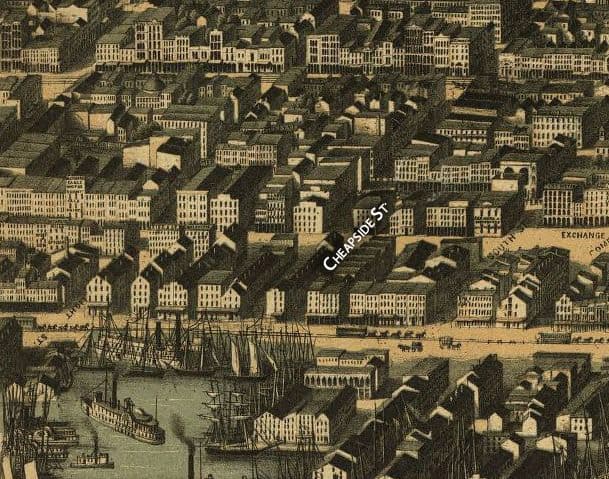 As their barrel is embossed B.T. – 1865.- S.C., SMITH’S DRUID BITTERS, we can say that their bitters was invented 1865. Their label said that the bitters was a tonic that would cure dyspepsia, heartburn, indigestion, sick stomach, chills & fever & C & C. A pleasant and agreeable drink. The best appetizer in the world.

The bitters had a relatively short shelf life which attributes to the rareness of the bottles.

Why is Druid in the name? 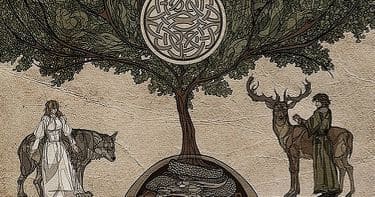 Why did John Smith call his medicine Smith’s Druid? A druid was a member of the high-ranking professional class in ancient Celtic cultures. Perhaps best remembered as religious leaders, they were also legal authorities, adjudicators, lorekeepers, medical professionals, and political advisors. Celtic mythology is the mythology of Celtic polytheism, the religion of the Iron Age Celts. Like other Iron Age Europeans, the early Celts maintained a polytheistic mythology and religious structure. Celtic mythology is rich with symbolism of life, death and rebirth, replete with the magic of nature and the ancient world.

The art above is the Celtic tree which is a symbol of the eternal renewal of life – an important theme in Celtic mythology. The tree was also used in the Smith’s Druid Bitters logo. 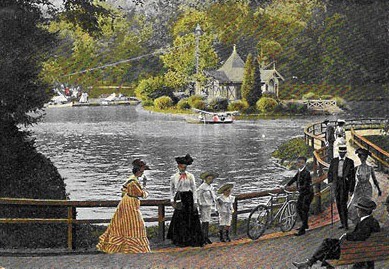 It is thought that John Smith and his wife lived and had a horse farm on what would become Druid Hill Park. This 745-acre urban park in northwest Baltimore was bounded by Druid Park Drive (north), Swann Drive and Reisterstown Road (west and south), and the Jones Falls Expressway / Interstate 83 (east). Inaugurated in 1860, Druid Hill Park, a famed urban park, ranks with Central Park (begun in 1858) in New York City, Fairmount Park (1812) in Philadelphia and Golden Gate Park in San Francisco as the oldest landscaped public parks in the United States.

The history of Druid Hill Park began over two centuries ago when the Susquehannock Indians ceded land in 1652- that included that park’s area and its holdings to Lord Baltimore. Because of its access to the Jones Falls stream and other springs it is believed to have been an ideal site for the Native Americans. Lord Baltimore subsequently began to parcel the land out. 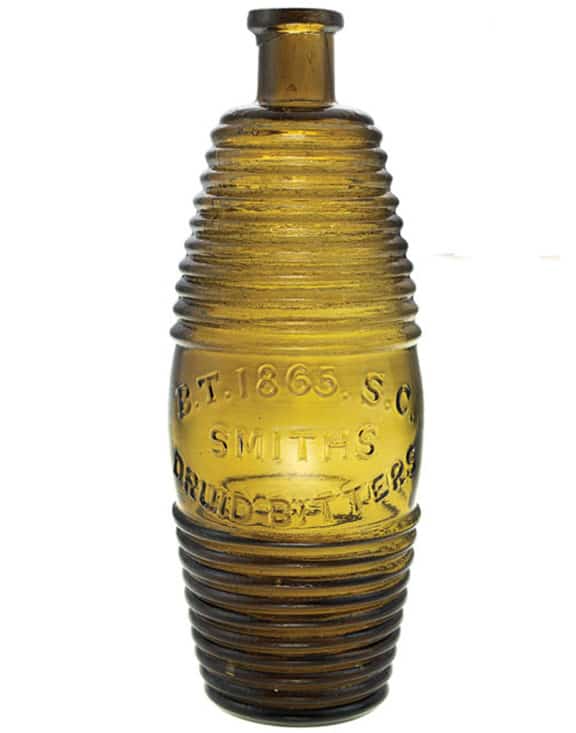 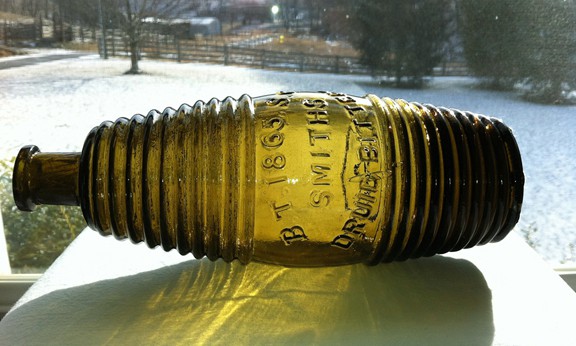 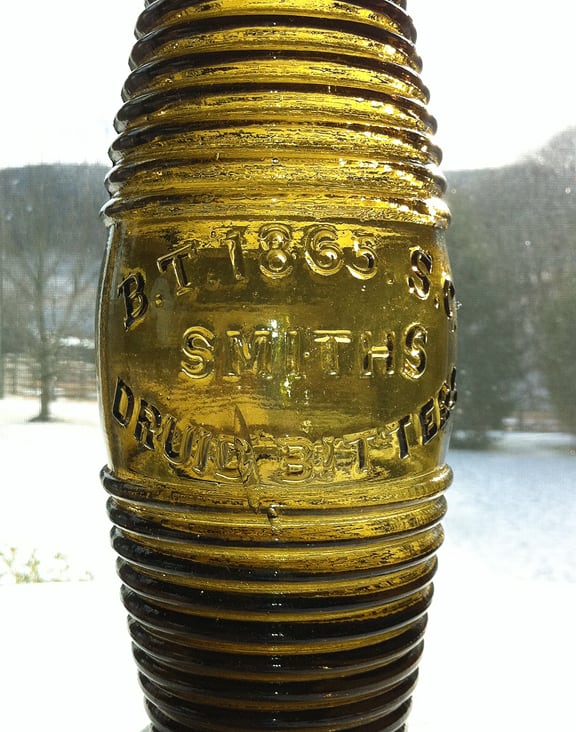 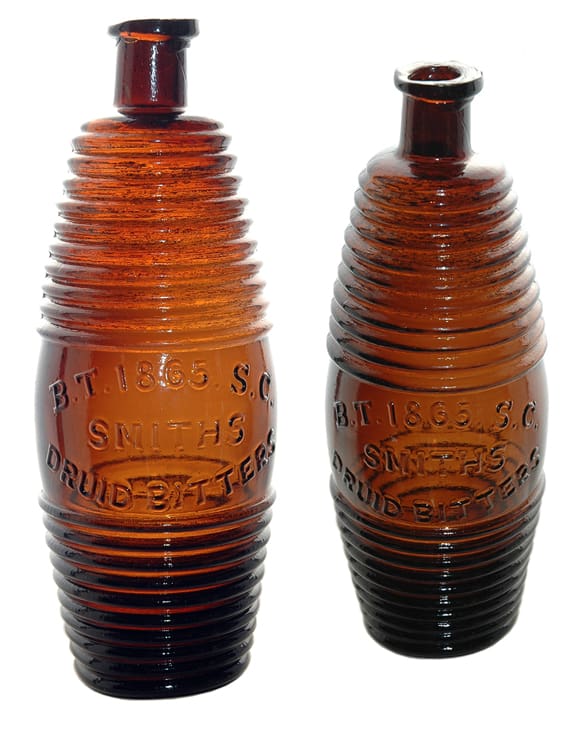 SMITH’S DRUID BITTERS B.T. 1865 S.C. Here’s a scarce barrel and one we do not see often. Medium amber with a hint of red. Ex-Stewart Elman collection. Grade: When we first looked at this one we though that the top was reshaped or buffed. Such is not the case. Under extremely high magnification, one can see a continuance of not only texture but also patina, which erases any doubt as to the authenticity of the mouth. Just the lightest signs of normal wear; we’ll grade this a Mint 9.2. – American Bottle Auctions – Meyer Collection 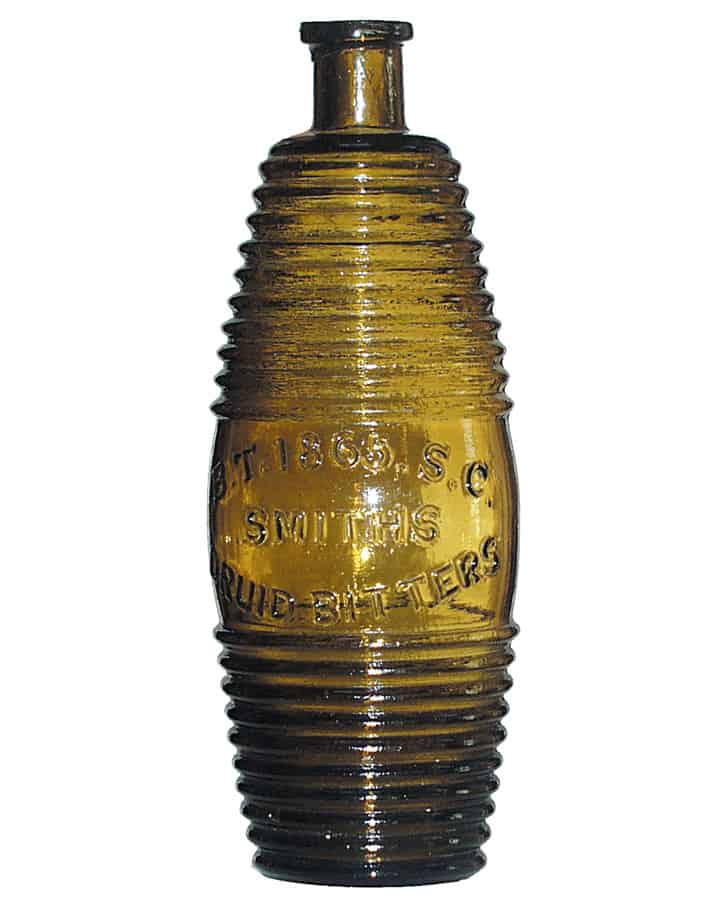 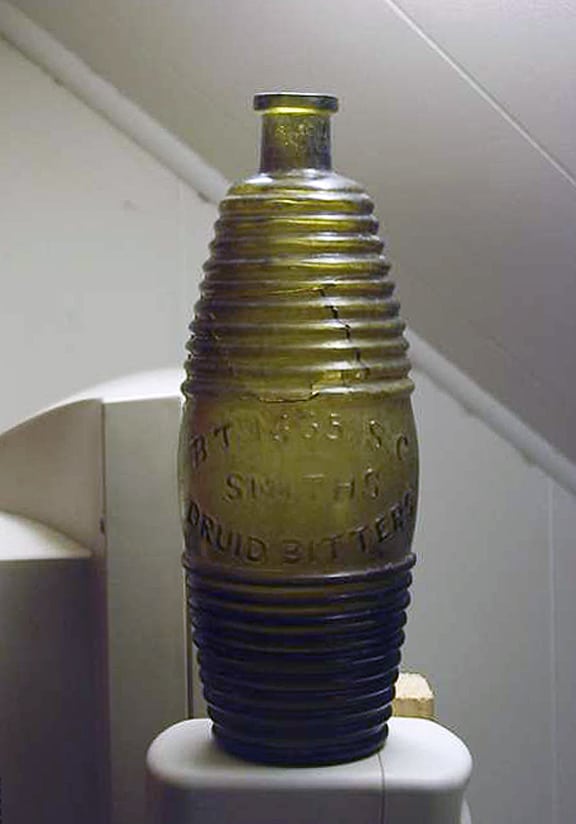 I dug a very rare barrel bitters from a small 4 foot deep wood lined privy a few weeks ago. Sadly it was in several pieces on the bottom of the hole. I saved the pieces and plan to glue them back together. It was embossed B.T. 1865 S.C. / SMITHS / DRUID BITTERS. this is a rare Baltimore bitters and it was in a very rare green color. It seems like the good stuff always broke. Chris (Rowell) on AntiqueBottles.net 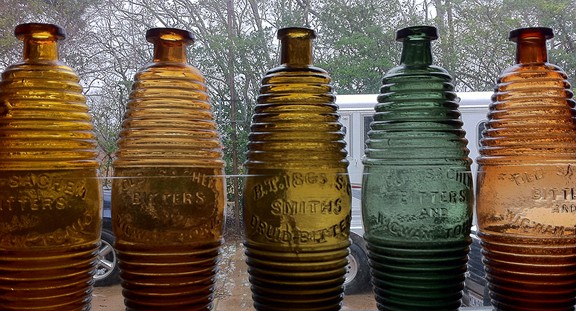 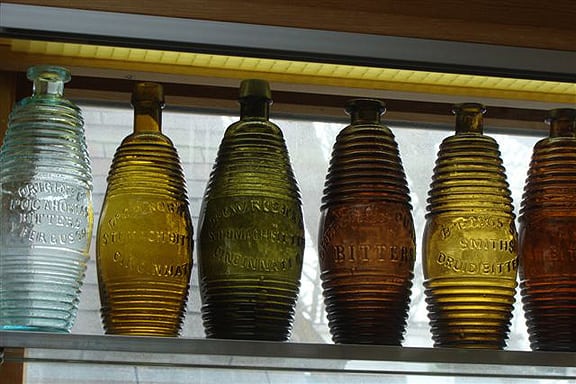 Gorgeous yellow B.T. 1865 S.C. SMITHS DRUID BITTERS on the right in a run of figural barrels in the John Feldmann Collection

1867: Receipt (above in post) dated May 1867. Cream paper receipt with black engraving of a Smith’s Druid Bitters logo and a hand written notation as follows, ‘on o/e all due up to this date except 1 barrel whisky’. This is also the exact receipt pictured on p. 506 of ‘Bitters Bottles’ (R/H) – Meyer Collection